You might have come across a group of monkeys running around trying to grab food from people at the park. While it’s tempting to offer monkeys your lunch or snack while observing them, you still want to be careful about what you feed them. Popcorn is a common snack people sometimes feed to monkeys while also wondering if it’s appropriate for the animals.

Monkeys eat popcorn, and they enjoy it. Although popcorn isn’t something monkeys eat in the wild, they’ve learned to eat it just like people do. Zookeepers use popcorn as a treat for monkeys, and they seem to enjoy snacking on it.

The rest of this article will explain when monkeys eat popcorn, whether or not it’s safe for them to do so, and some other human snack foods that monkeys like to eat. It also discusses some key nutrients that monkeys receive from popcorn.

If you’re wondering if it’s okay to give monkeys popcorn, you’d be surprised with the answer.

Monkeys do eat popcorn, but it’s not their main food. Popcorn is a snack that monkeys enjoy. In the wild, monkeys typically don’t eat popcorn. But monkeys living in the zoo or near humans sometimes eat popcorn if the snack is provided to them.

You may also wonder why monkeys eat popcorn.

As mentioned in this New York Times article, research shows that social cues from monkeys influence other monkeys, explaining why monkeys eat popcorn.

Monkeys eat popcorn because they may have seen other monkeys do it. There have also been scientific studies showing that monkeys imitate human behavior as well. Monkeys even tend to prefer people who imitate them.

This video from the Long Island Aquarium shows a Japanese Snow Monkey chowing down on some fresh popcorn:

Zookeepers use this tasty treat to break up the monotony of a monkey’s regular diet on special occasions. Monkeys enjoy this departure from routine as popcorn is a fun, tasty treat.

Monkeys can imitate food preferences. According to a study done by the University of St. Andrews, Vervet monkeys will adopt new food preferences based on surrounding monkeys’ behavior.

When observing other animals eating a different color of corn, the monkeys began to prefer the same color they saw their neighbors eat! Monkeys enjoy mimicking behavior, so it’s no surprise that they eat what they see other monkeys and even humans eating!

Should You Feed Monkeys Popcorn at the Zoo or in the Jungle?

It’s best that you don’t feed monkeys popcorn at the zoo or in the jungle. Like many other foods that humans eat, popcorn isn’t always nutritious—they’re bad for both humans and monkeys. Some popcorns contain high sugar, oil, salt, and preservatives.

The following discusses in more detail why you should avoid feeding monkeys at a zoo or in the wild:

Professional zookeepers, even animal trainers, can feed monkeys popcorn. Monkeys must eat popcorn free of any added salt or oils for safe consumption. In short, it’s okay for monkeys to eat popcorn, but they shouldn’t eat unhealthy popcorn like that from a movie theater bucket.

Is Popcorn Healthy for Monkeys To Eat?

Popcorn is healthy for monkeys to eat in moderation. Monkeys can keep many types of human foods as long as they’re not high in sugar, salt, oil, or preservatives. Giving monkeys popcorn is okay because it may encourage them to eat less meat, thus reducing their cholesterol—good for them!

Is Popcorn a Good Source of Protein for Monkeys?

Popcorn is a pretty good source of protein for snack food! While there certainly isn’t enough to rely on as a primary source, the average serving of popcorn contains 3 grams (0.105 oz) of protein.

Even if this isn’t a large amount, it contributes to the monkey’s protein source while they’re snacking and thus could cut down on the amount of meat they consume, even if by just a few bites.

Is Popcorn a Good Source of Fiber for Monkeys?

Popcorn is a surprisingly good source of fiber. The average serving of popcorn contains 3.5 grams (0.12 oz) of fiber. That said, it’s okay for monkeys to snack on popcorn. However, they shouldn’t eat too much popcorn. Also, they should eat plain popcorn only.

Does Popcorn Have Vitamins and Minerals That Monkeys Need?

Monkeys have a diet rich in vitamins, minerals, fiber, and protein in the wild. Popcorn is a great snack that includes many of these essential nutritious elements. Monkeys love to eat popcorn much like humans do as it is a fun food to snack on and something different from their everyday diet.

Sure, monkeys eat popcorn, but we need to leave the job of feeding them to the professionals. Monkeys need a special popcorn free of any salt or excessive oils. Next time you’re at the zoo, pay attention because the monkeys might be having a fun popcorn snack! 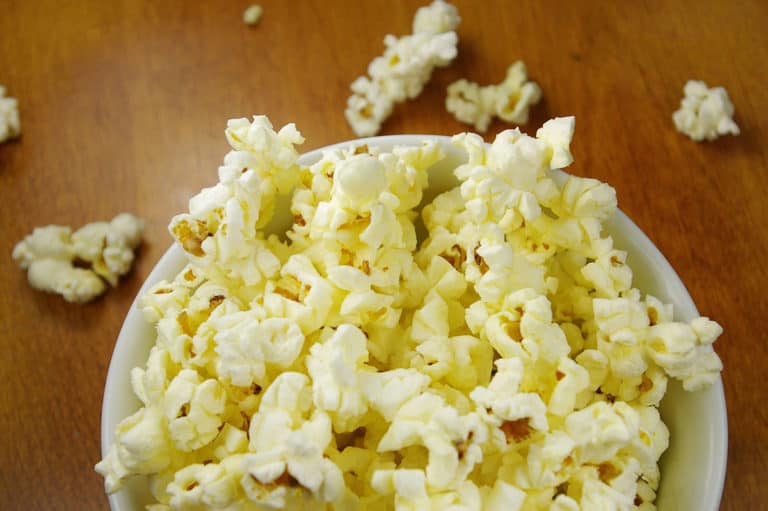 Pigs will eat almost anything, but there are some things you should never give them, like chocolate. But what about popcorn? Can they eat it? Pigs can eat popcorn as long as you’re careful with the toppings. Just make sure to avoid too much salt or cheesy ingredients, and keep an eye on how much…