Cast iron skillets are a beloved part of many kitchen appliances across the country. They are durable and can cook nearly any food you can think of. In this overview, we’ll explain (in detail) how to make popcorn using a cast iron skillet!

One of the benefits that you’ll enjoy making popcorn using this method is the taste difference it provides over making popcorn in the microwave. There aren’t too many things more satisfying than whipping up a homemade batch of popcorn for a family movie night while you’re enjoying each other’s company.

Have you ever tried making popcorn with a cast iron skillet before? Or maybe you did, but the results weren’t quite what you expected? Read to find out how to make your favorite snack that everyone in the house will enjoy!

What Items Do I Need To Make Popcorn With A Cast Iron Skillet?

Before you begin, make sure your cast iron skillet has been thoroughly cleaned and dried, which will prevent any kernels from burning. You’ll need to use oil that has a higher smoke point, such as coconut, canola, or vegetable oil.

Also, don’t forget that these types of skillets get extremely hot handles, so you’ll need a set of oven mitts or pot holders. Finally, don’t forget your popcorn kernels, a large bowl, and some flavorings that can be used to level up your popcorn ( popcorn salt, ranch seasoning, garlic salt, or Parmesan cheese).

What Are The Steps To Making Popcorn On The Cast Iron Skillet?

Step One- Preparation is key when you’re getting ready to make popcorn with this method. Place your cast iron skillet on the stovetop and add 2-3 tablespoons of oil. It’s imperative that the oil completely coats the bottom. You can use a brush to help. At this point, it’s not necessary to put the lid on the skillet just yet.

Step Two– Now, you can turn your stove on, and place the heat level on medium. Don’t be tempted to crank it up too high to avoid burning the popcorn. It’s a little tricky to determine if the oil is hot enough, so you can always test a kernel or two. If they pop, then you’re good to go. (make sure you remove your test kernels).

This recipe can also be used at low heat if you decide or if you’re concerned about the popcorn burning. The only difference here is that you’ll be waiting just a little longer for your popcorn to be made. This method will take about 5-8 minutes rather than 2-4 minutes.

Step Three- Now you are ready to add the kernels! One cup of popcorn should be enough for about four people, and always place the popcorn in a single layer. It’s best not to exceed this amount, so the popcorn cooks properly. If you’re making it for a large group, then consider making one cup of kernels at a time. Now you’re ready to place the lid on the cast iron skillet.

Step Four- You won’t have to wait long until the kernels start popping, so make sure to stay nearby! You can expect popcorn to start popping within 2-3 minutes using medium heat. Now you need to put on your oven mitts or pot holder to grasp the handle (it will be hot!) As your popcorn starts to pop, gently shake the skillet to ensure all the kernels get popped. Continue this process until all the seeds have been popped.

You’ll need to keep a close watch and listen carefully for when popping has slowed down. A good rule of thumb is about 2-3 seconds between pops. Once you notice this, it’s imperative to take the skillet off the heat source immediately, or you’ll be eating burned popcorn. Wait a minute or two in case any kernels continue to pop, then you can remove the lid from the skillet.

Step Five- You can use a ladle to remove the popcorn into a large bowl once you’ve taken the lid off. Continue to use extra caution as cast iron skillets stay hot for a considerable amount of time. The popcorn is already delicious, but now you can add other flavors as you wish, such as popcorn salt, melted butter, parmesan cheese, and more.

What Kind Of Cast Iron Skillet Works Best For Popcorn?

Like any other kitchen gadget, cast iron skillets come in various shapes and designs. First, you’ll want to use one that is at least 10 inches in diameter. Secondly, for making popcorn, it’s always better to use one that has a smooth bottom.

The ones with grates won’t work as well because the oil won’t get distributed across the surface, which could cause it to burn. Also, a cast iron skillet will always be a better option than an ordinary pan, as the heat will get dispersed evenly. Sometimes, using regular pans can cause your popcorn to get a little soggy.

Unsurprisingly, a cast iron skillet is the perfect vessel for making popcorn. This way of popping corn has been around since before electric stoves were even invented!

Follow these steps to ensure that you have the best possible stovetop experience when it comes time to make your next batch. One word of caution – be sure not to add too much oil to avoid burning and sticking. If you’ve never tried making popcorn in a cast iron skillet before, give it a try! This article has provided all the steps to ensure your first attempt is perfect. If you’re craving homemade popcorn but don’t have any oil, you’re not entirely out of luck. Most of the time, you’ll be able to use the butter you have on hand to both cook and flavor your popcorn. However, there might be some preparation involved, and if you aren’t using the proper butter, you may… Popcorn is among the world’s most famous snacks, favored for multiple events, from movie watching to party hosting. Your popcorn machine not heating up is a common issue that seems to affect almost every small business owner in the popcorn cooking industry. The primary reason your popcorn machine might not heat up is most likely… Everyone loves popcorn. However, a bag of microwavable movie theater popcorn slathered in butter and salt isn’t the healthiest snack for you. Luckily, there are many different tricks to make popcorn healthier. Here’s how to make healthy popcorn that tastes good:  Avoid most microwave popcorn  Make your popcorn on the stove Use healthy oils Measure… Most people enjoy popcorn as a quick and delicious snack.  You can add more to your popcorn than just butter and salt, and it does not take a ton of time or ingredients.  Spices, cookies, and candies can be added to popcorn to give it more flavor.  These are simple ingredients that are easy to… 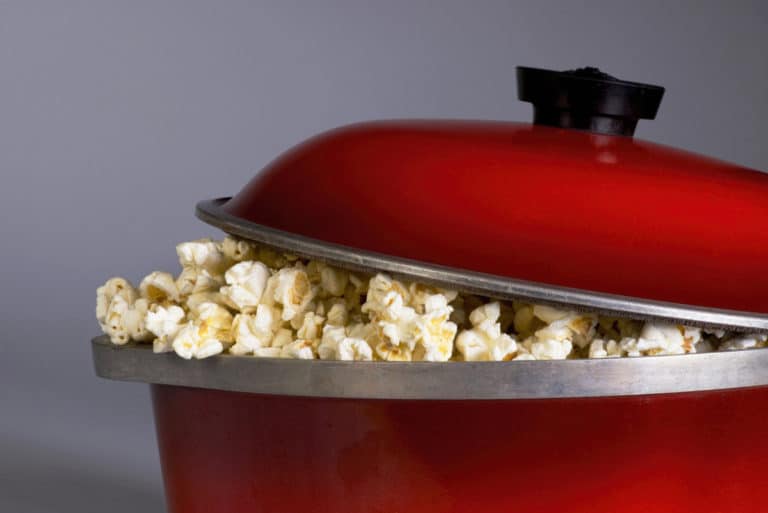 Everyone knows making popcorn in a microwave is quite easy. However, it gets a little tricky when you want to make it from scratch on the stovetop. Have you ever wondered what are the best ways to make one of your favorite snacks on the stove? For stovetop popcorn, get a heavy plan, oil, and…