Popcorn is a terrific, light, and often low-calorie snack that can be made in the microwave and ready in a matter of minutes. It is delicious, easy to cook, and can be a diverse ingredient to use in the kitchen. However, popcorn doesn’t always pop fully the first time around.

Popcorn kernels can be reheated and popped a second time if they do not pop the first time. Once your popcorn kernels are clean of butter and oil, you can re-pop them in the microwave or on the stovetop.

How Do I Re-Pop Popcorn Kernels?

Whether using a microwave bag or a reusable popcorn popper, you’ll often find that some kernels remain at the bottom of the container once the process is complete.

Rather than wasting those kernels, it is possible to re-pop them. Here’s how:

To re-pop popcorn kernels, start by wiping off any butter or oil. Then, place the kernels in a new bag or popper and reheat until they pop.

Most times, unpopped popcorn kernels will have a second chance to pop. However, a few necessary steps must occur to properly re-pop your popcorn kernels:

Additionally, some popcorn kernels dry out and lose their moisture. These seeds are referred to as “old maids.” If you have come across some old maid kernels, try adding a little bit of water to these kernels artificially. This helpful act can revive them for proper popping.

Can I Re-Pop Popcorn In The Same Container?

It is easy to re-pop your leftover popcorn kernels. However, popping them in the same container is not always the best idea.

You can re-pop popcorn in the same container if you use a reusable popper. However, if the popcorn came from a microwave bag, you’ll need to find a new brown bag in order to re-pop them.

Reusable poppers like this The Original Popco Silicone Microwave Popcorn Popper from Amazon.com are a terrific alternative to wasteful bags. Once used, simple wash, dry, and store for the next time. Not only that, but it’s often cheaper to buy kernels in bulk.

With a popper like the Popco Popper, you can easily re-pop any leftover kernels.

However, as mentioned, not every popcorn kernel is guaranteed success. For example, some kernels do not have the right amount of moisture to pop successfully, or it just might be difficult for them to bloom into popcorn.

Why Did My Popcorn Kernels Not Pop?

Everyone loves to eat popcorn. It’s tasty, crunchy, and a great snack to pair with social events, movies, and celebrations. Although cooking this food is easy, it can be frustrating to find extra kernels at the bottom of your microwavable bag or pot.

Popcorn kernels may not pop the first time they have exposure to heat because they do not have the correct amount of moisture. Popcorn kernels have to have some water to pop successfully, so if they have been left out to dry or are very old, you may find they won’t pop at all.

Popping all of your kernels in one sitting is challenging because a large majority of the popcorn kernels will heat quickly. If you continue cooking the popcorn to heat any unpopped kernels, chances are the already popped corn will start to burn.

Although moisture is the most common reason popcorn kernels don’t pop, there are a couple of other reasons:

Why Do Popcorn Kernels Need Moisture to Pop Successfully?

Popcorn kernels need to have a specific percentage of moisture inside to turn into a delicious snack successfully. That’s why it’s advised to keep them in an airtight container.

Popcorn kernels need 13.5-14% moisture to pop successfully because they need pressure to expand. As the kernels heat, any moisture inside will turn into steam, which, in turn, causes expansion inside the seed. With enough pressure, the kernel will burst, allowing the starch inside to become popcorn.

If popcorn kernels are not stored properly, they can lose their hydration or, perhaps, gain humidity. Here are three great ways to seal your popcorn kernels before cooking:

Popcorn is a delicious snack that is appreciated by people worldwide. It is delicious, flavorful, and diverse for many culinary creations.

Tip: You can use a brown paper bag, a reusable silicone microwave popper, or an air popper to try reopping your popcorn. If you are going to try repopping them on the stove top, I would use a much smaller pan. 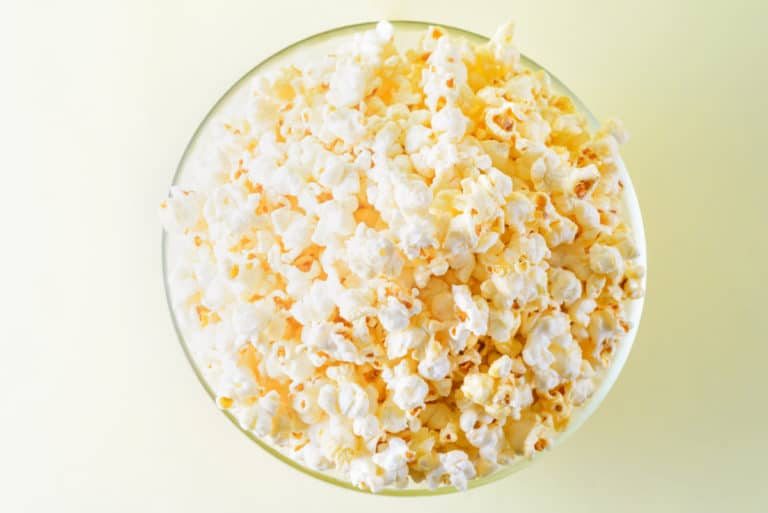 Popcorn is a delicious snack best enjoyed at a movie night among friends. As much as we love to eat popcorn, getting it stuck in our throat can be a terrible experience. Sometimes it feels like we’ll never be able to get it out either! Removing popcorn from inside a throat will require drinking plenty…

With much of society being focused on good overall health, you may not think of popcorn as something that could help. But what is popcorn’s effect on people who suffer from constipation? Constipation is a common ailment that many different things can cause. While there are a number of over-the-counter remedies available, some people may… Popcorn is an easy snack to make, and when it’s air-popped and lightly seasoned, it’s generally a low-calorie and heart-healthy food. There’s nothing like a bowl of fluffy popcorn. But making popcorn can be frustrating if your popcorn won’t pop or comes out small.  Some popcorn pops small because of the amount of moisture in…