Popcorn is an iconic treat enjoyed during movies and other entertainment. Though all popcorn pops white, the kernels come in many different varieties.

Red Popcorn is a variety of popcorn in which the kernels are a reddish-purple instead of the more common yellow varieties. Red popcorn is harder to find but pops into crunchier and more healthy popcorn that has a nuttier taste. Though the kernels are colored, the interior is still white.

Here’s everything that you need to know about the taste, the color, and the nature of red popcorn.

Where Does Red Popcorn Originate?

Red and purple corn kernels come from a specific variety of corn known as Flint Corn or Indian Corn. Unlike Field Corn (which is used to feed livestock) or Sweet Corn (which is meant to feed humans) Indian Corn is rarely found in modern times. Hundreds of years ago, however, it was a staple food in America.

Native Americans cultivated Indian Corn because of its durable nature. The plant got its nickname (Flint Corn) from the strength of the sheaves around the corn, which made it more difficult for animals to eat.

When colonists from Eurpoe came to the Americas, it was Indian Corn that they were taught to cultivate by the natives. It soon became a staple in their diets, and led to the prevalence of corn in all that we eat.

Indian Corn is uncommon today because it is more difficult to grow, harvest, and preserve than Field Corn. Despite the differences, many different corn varieties are often found in special food dishes or even in drinks. One of the reasons that it is sought after is that it is healthier than more common types of corn.

The denser kernels contain more vitamins and minerals than sweet corn or field corn. Popcorn is a great example of a dish that really shows off what Indian Corn has to offer.

How Do I Pop Red Popcorn?

In today’s day and age, there are many ways to pop popcorn, with each method producing a slightly different product. For red popcorn, the old-fashioned way of popping corn in a pan with a lid and some oil works just fine.

Just find a large, heavy-bottomed pan (the thick metal at the bottom helps distribute the heat evenly). Put your il in the bottom of the pan, and start heating it up at a medium temperature. If you turn the het up too high, you can burn your oil and your popcorn.

Once the oil is hot enough (you can throw in a couple of kernels and wait until they pop to gauge the heat), throw in your red popcorn kernels. Put on a lid at a slight angle to allow the steam to escape, as too much steam in the pan will make your popcorn soggy.

Shake the pan firmly as your popcorn kernels pop to help it all cook evenly and to keep anything from burning to the bottom. As the popcorn rises to the lid of your pan, pour it off into a bowl nearby. Continue to shake the pan and to pour off the popcorn until it all has popped.

There are dozens of other gadgets and methods to pop popcorn, and they will all work for red popcorn as well as yellow. Just know that some methods (like using an air-popper) will generally produce lower yields of popcorn, leaving a higher percentage of the kernels unpopped.

Though the kernels themselves are red, the popcorn still pops into white blossoms. The white color comes not from the specific tint of the popcorn kernel but from the heat used to pop the popcorn.

How Does Red Popcorn Taste?

The main reason that people seek out red popcorn is because of its taste. Unlike yellow popcorn, which has almost no taste of its own and needs a significant amount of flavorings added to it to make it a real snack, red popcorn has its own particular flavor. This flavor is described by many as “nutty” or something of the like. The taste is definitely reminiscent of the corn that the snack came from.

Because of the natural flavor of red popcorn, it doesn’t need much in order to make it delicious. Most people like it best with just a little bit of olive oil or salt added on top. However, there are dozens of different flavors that are added to red popcorn to make it truly unique.

As with classic popcorn snack bowls, red popcorn is often topped with butter, salt, or oil. The particulor flavor of the red popcorn will go great with these traditional toppings, with the innate red popcorn flavor providing a great base to work from.

With that being said, however, red popcorn gives popcorn connoisseurs an opportunity to go for a popcorn dish that is not so commonly eaten. Red popcorn can be topped with parmesan cheese, paprika, cinnamon, or even steak seasoning to make a snack that trutly amazes. Whatever sweet, salty, or savory thing you can think of to top off your popcorn with will give you great results.

Where Can I Buy Red Popcorn?

You can find red popcorn kernels at large crocery stores or supermarkets. It is popular enough that you shouldn’t have too much trouble finding a bag of kernels to pop. However, if you don’t have any luck at stores nearby, there are plenty of suppliers that ship red popcorn kernels to anyone that wants to try their taste or needs to restock their supply.

Unfortunately, because of the popularity of yellow popcorn kernels, red popcorn kernels are more of a specialty item and generally cost more. Be sure to give them a try before you sign them off and keep buying yellow- let their flavor and style speak for themselves. Popcorn is one of the healthiest snacks that one can eat and even healthier when it is vegan. Whether you’re on a restrictive diet or you just want a healthy snack, popcorn won’t disappoint. Even if you’re vegan, you can enjoy popcorn as it is vegan in its raw state. It only becomes non-vegan when… Most people will agree that it’s hard to enjoy a movie without munching on popcorn. When it comes to flavor, the possibilities are endless. Season your popcorn with a range of different seasonings and spices, depending on what tickles your fancy.  You can add seasoning to some popcorn makers, but it’s better to season your… 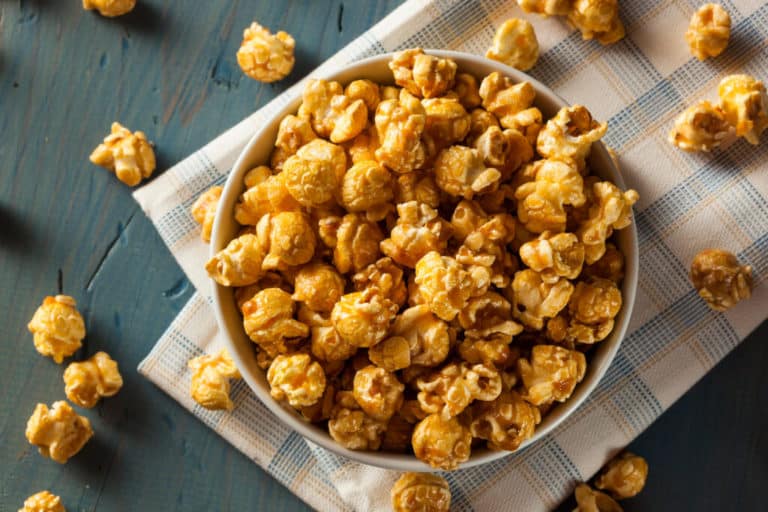