Disney is the master of getting us to pay obscene amounts of money for cheap items. From t-shirts to tiny “designer” backpacks to giant turkey legs, they know how to empty anyone’s wallet. So how do they get people to pay extra money for popcorn buckets, of all things?

Many people who go to Disneyland are locals, so buying a refillable popcorn bucket saves money in the long run. There are also plenty of Disney fans that want to collect every popcorn bucket since the design changes every year and there are specialty buckets offered for holidays and celebrations.

Disney sure knows how to make something as commonplace (and cheap) as popcorn into a lucrative product. Keep reading to learn more about why the popcorn buckets are bought up by millions of people every year.

How Much Are The Disney Popcorn Buckets?

Don’t worry, this all relates to popcorn buckets. See, the thing is, the popcorn bucket isn’t just a cool plastic bucket for popcorn. It’s refillable. And that offer doesn’t just extend for the rest of the day. You can keep refilling that popcorn bucket every single time you take it to Disneyland with you. Whether it’s months or years later, it will always be refillable.

When you buy a popcorn bucket for the first time, it will be more expensive than just buying a cardboard box of popcorn for $5.25. Popcorn in refillable souvenir buckets can cost anything from $12 to $25 based on the design. This might seem like a horrible deal. Why pay $25 for popcorn just for a fancier bucket when you can get the same amount of popcorn for $5.25? But popcorn refills with the bucket cost only $2.

To better calculate the cost over time, take a look at these equations:

Imagine you’re a local that lives in Anaheim and you go to Disneyland every other weekend. Buying a popcorn bucket suddenly seems like a great idea. You get to use it forever and you’re saving $3 per popcorn purchase for as long as you have Disneyland passes. Now you can spend that hard-earned money on more important things, like cinnamon almonds, turkey legs, princess costumes or maybe even more popcorn buckets!

Popcorn buckets aren’t just plain plastic buckets. They’re not just white and red striped buckets either. This is Disney, after all. Just like everything else they offer, their popcorn buckets must be magical.

The “cheap” $12 buckets are fun and bright, with pictures of Minnie and Mickey at the park themselves. This is a good choice for a popcorn bucket, and it’ll work in a pinch, but it’s not the only kind that Disney offers.

There are always specialty buckets offered for sale at the popcorn stands. They cost from $18 to $25, and they’re not just plain plastic buckets with a pretty design printed on the outside. These popcorn buckets can be anything. It might be a ghost from the Haunted Mansion. It might be made to look like a traditional Mickey Mouse balloon. Or, it could be a literal miniature model of an AT-AT from Star Wars, with popcorn coming out the top. And the most important part is, you never know when Disneyland will stop selling these special popcorn buckets.

Since they’re only offered for months at a time, some people make it their special mission to collect as many popcorn buckets as they can. And we can’t blame them. Most merch at the parks is also sold online, but not popcorn buckets. Popcorn buckets are one of the few items that you can ONLY buy while on a trip to the parks. And because of this, collectors and international guests alike love to buy souvenirs that remind them of the special experience they had going to the parks.

Click this link to see some of the most desired popcorn buckets for die-hard collectors.

Why Does Disney Popcorn Smell So Good?

When all is said and done, the popcorn bucket isn’t just popular because it’s a good deal, or because the buckets are a rare collector’s item. It’s because Disneyland is pumping out the scent of popcorn at each stand. When guests walk by the stand, they won’t just see the popcorn. They can smell it.

Let us tell you, there’s nothing like being exhausted after a long day at Disney, and then walking past an aromatic popcorn stand. The buttery, salty flavor fills up your soul, and it’s almost impossible to not want popcorn.

Disney does this on purpose. They have the scent of hot, buttery popcorn pumped out next to each stand so that tourists will be drawn to it, like a moths to a flame. This isn’t the only time they use a trick like this. They also pump out the scent of cookies next to their bakeries so guests will be more likely to purchase a $4 chocolate chip cookie or $5 Mickey Mouse-shaped Rice Krispie treat.

Obviously, the guests who are drawn to the popcorn scent can also buy the $5.25 option, no bucket included. But let’s face it; when you’re a tourist or local at the “Most Magical Place on Earth,” why wouldn’t you pay a few extra bucks to get a specialty popcorn bucket? Even if you’re not a die-hard collector, it’s still a fun souvenir that you can still use as your popcorn bucket at home.

Tip: For your favorite teacher, you could purchase a Dinseyland Popcorn Bucket Online and fill it different popcorn kernels, popcorn seasonings and butter spray or here are some other ideas for Teacher Appreciation Gifts 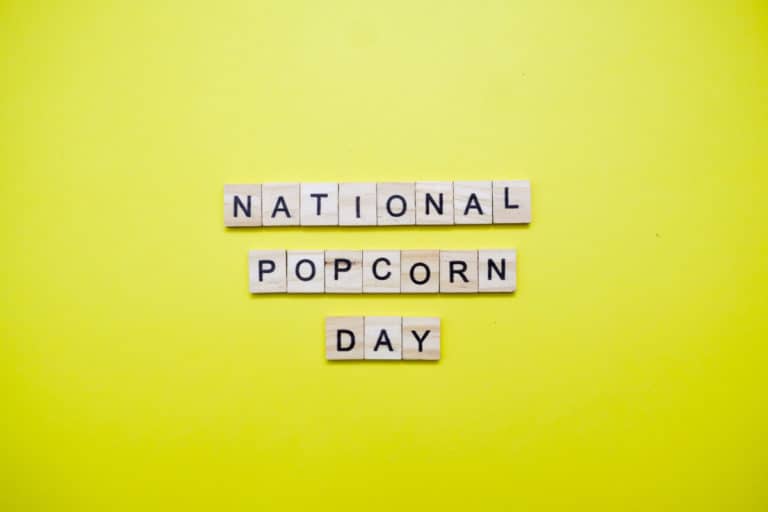 Our winged pets and the wild birds in our yard are so fun to watch and interact with each day.  It makes sense that you might want to create food or toys for them to enjoy. When it comes to foods that you can feed your birds, popcorn is a good option.  Making popcorn balls… Popcorn is a snack that you can eat guilt-free, as long as you don’t overdo yourself and stay conscious about what you add to it for flavor. Eating popcorn is good for you as it’s high in fiber and phenolic acids. However, some people don’t respond well to popcorn and experience a nasty stomach ache. … The most common popcorn seasonings are butter and salt; however, popcorn also goes well with many other seasons. But what else goes good with popcorn? Popcorn can be seasoned and eaten on its own or served as a part of a dish. Some unique popcorn seasonings include honey, hot cocoa, garlic, and parmesan. Recipes that… Popcorn is always a fun party snack. However, when you’re looking to add some adult flavors, this classic snack can become a tipsy treat. Tipsy popcorn is made with your favorite alcohol. The best part is you can cook off the alcohol or add it after cooking and keep the alcohol content. So, your popcorn… Popcorn is the world’s favorite movie snack and while it might be extremely popular, there are some things that not everyone knows about popcorn. We have discovered 100 facts to share with you about popcorn covering the topics, history, nutrition, consumption and more. Enjoy the list and we hope you are surprised by a few…